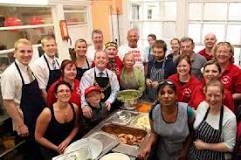 This Christmas our chosen Charity is Penny Dinners
Penny Dinners is a city-centre based charity that has been serving hot meals and snacks to the poor since the 1840′s. Since the recession struck more than five years ago, the number seeking help at their city-centre premises on Little Hanover Street has increased year-on-year.

So making sure everyone gets fed is no mean feat.
The charity serves meals to around 1,400 people a week, and will be serving over 150 meals this Christmas. Caitriona Twomey is a volunteer with Penny Dinners and says
“They are not coming in here unless they really have to. When they come to us it’s the last resort. They’ve hit that place where the struggle has become too hard for them and they make a decision and they come here.”

‘‘Many just come in one or two days a week when the money has run out,’’ she says.
“They are shocked and traumatized that they have to come and ask for food. It’s distressing for people.”

Cork Penny Dinners is a non-stop operation. The charity opens seven days a week, 365 days a year, thanks to a dedicated army of 180 volunteers who give generously of their free time. Their day grinds into action at 6am when the first of the workers arrive to begin food preparation and they open their doors to the public at 9am. Their premises are basic, consisting of a kitchen, dining room and outside toilet. There is no central heating. Caitriona describes an average day at Cork Penny Dinners.

“Sometimes we’ve fed 50 to 60 people by 10am,”  “If they are hungry, they are hungry so we would never make anybody wait. We have the dinners ready and we just go with it.’’

“If people come in early and the food is not quite ready we’ll give them a bit of toast and a cup of coffee while they are waiting… at least they are out of the cold.”

Patrons also get sandwiches and snacks to take with them so they have something to eat in the evening. But despite the generosity of the public, Caitriona says that they need more. The charity is currently seeking food donations, both non-perishable and perishable items, in the run-up to Christmas. If you would like to donate a packet of Veronica’s Snacks to Penny Dinners, simply like and Share the post on Veronica’s Snacks Facebook page where the Gluten Free Snack company have pledged to match every like and Share with a bag of delicious Veronica’s Crisps.

One thought on “Penny Dinners feeding the homeless in Cork”